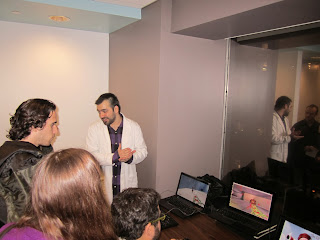 Recently we were fortunate enough to participate in a big game-testing event. Microsoft invited indie game developers to come to their offices in Midtown, New York, and have many people play though our game, no matter what stage of development we completed.
It so happened that our game is about 90 percent finished, so we had quite a lot to show off. However, we had no idea what the event would entail. Being that our company is called Give Up Games, we were naturally cynical and pessimistic about what the event would be like.
When we first arrived (on-time, I might add), the large event room was nearly empty, and there were only a handful of other developers there, and it seemed like we would have to passively-aggressively fight for the few tables that were there. We got the last one, and it happened to be in a corner right next to the garbage bin. Give Up.
Within a short while, though, the room began to fill up, both with game developers, and eager fans who wanted to play games before everyone else. People were standing shoulder-to-shoulder watching and waiting to play our game, and for the next few hours the two of us rarely had a quiet moment, while we entertained questions from fans, media, and fellow developers. Several people even came back more than once to play the game more! We heard from more than a few people that ours was the favorite game of the event.
It turned out to be a great experience, and we loved the opportunity to show our game to a welcoming public. We got a lot of good feedback and enthusiasm from fans, and we both felt that much more energized on this home stretch.
Thanks to all those who came out and played the game. 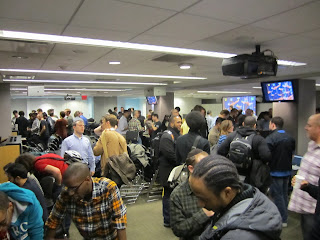 Posted by George at 5:34 PM No comments: