I learned a lot of 3d modelling skills through the use of Maya. It was wonderful to discover that Autodesk was releasing a pared down version of Maya for indie-game developers. After all, we don't really need all the water simulation, beautiful rendering tools, etc, that the full version of Maya has; and so the fact that MayaLT has so many of the useful features that I need as a game designer, and has taken out so many of the other features that are needed to create $100 million films, Give Up Games was able to buy a license for very little money, and use it to create The Elf Who Killed Christmas.

As we discussed earlier with a previous blogpost, all the characters (and everything else in the game) were created using MayaLT's modelling toolset, including smoothing, extruding, and insert edge loop tool. 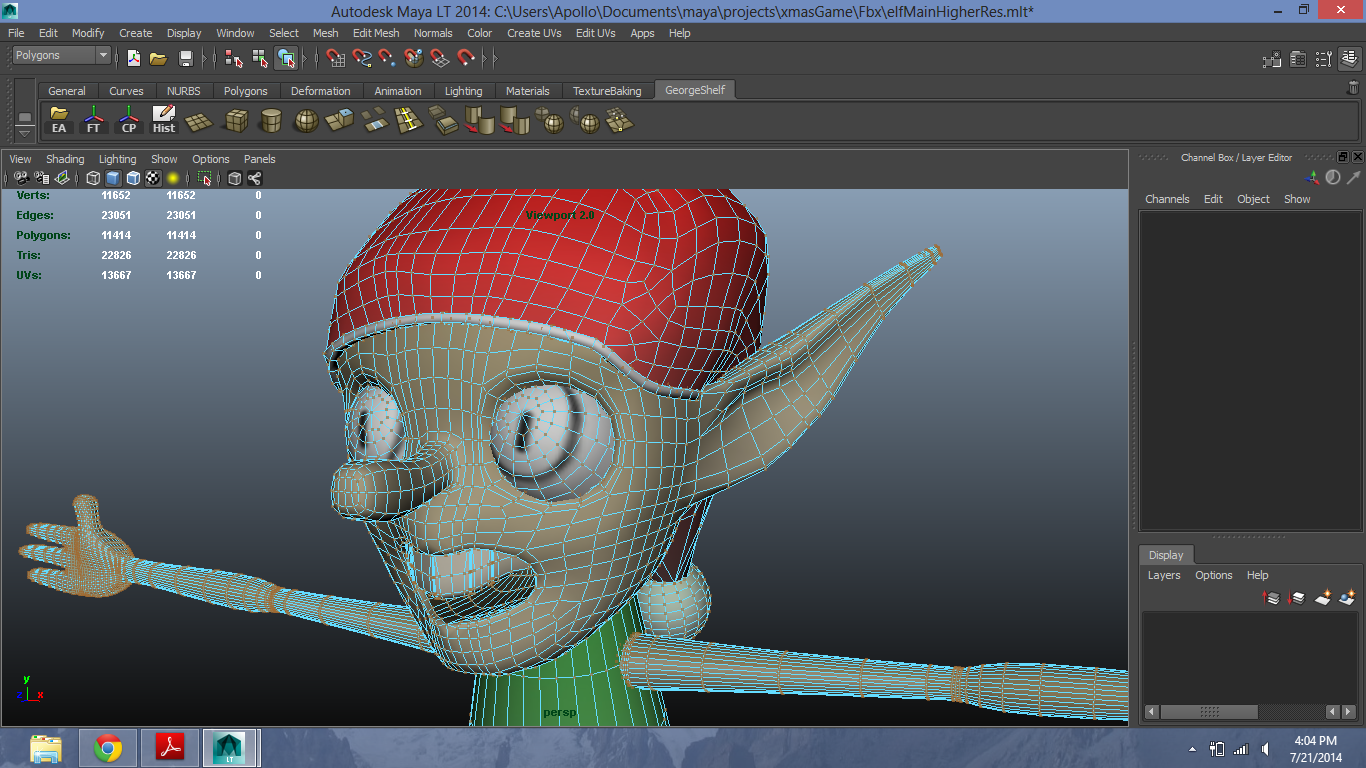 For UV editing, MayaLT's toolset was also super easy. in a previous blogpost, we discussed our texture methodology, and this really simplified the UV editing that we needed. All that what required was getting a quick one-click planar UV editing shot, separating out all the different parts of the body, and positioning them on in the texture image. 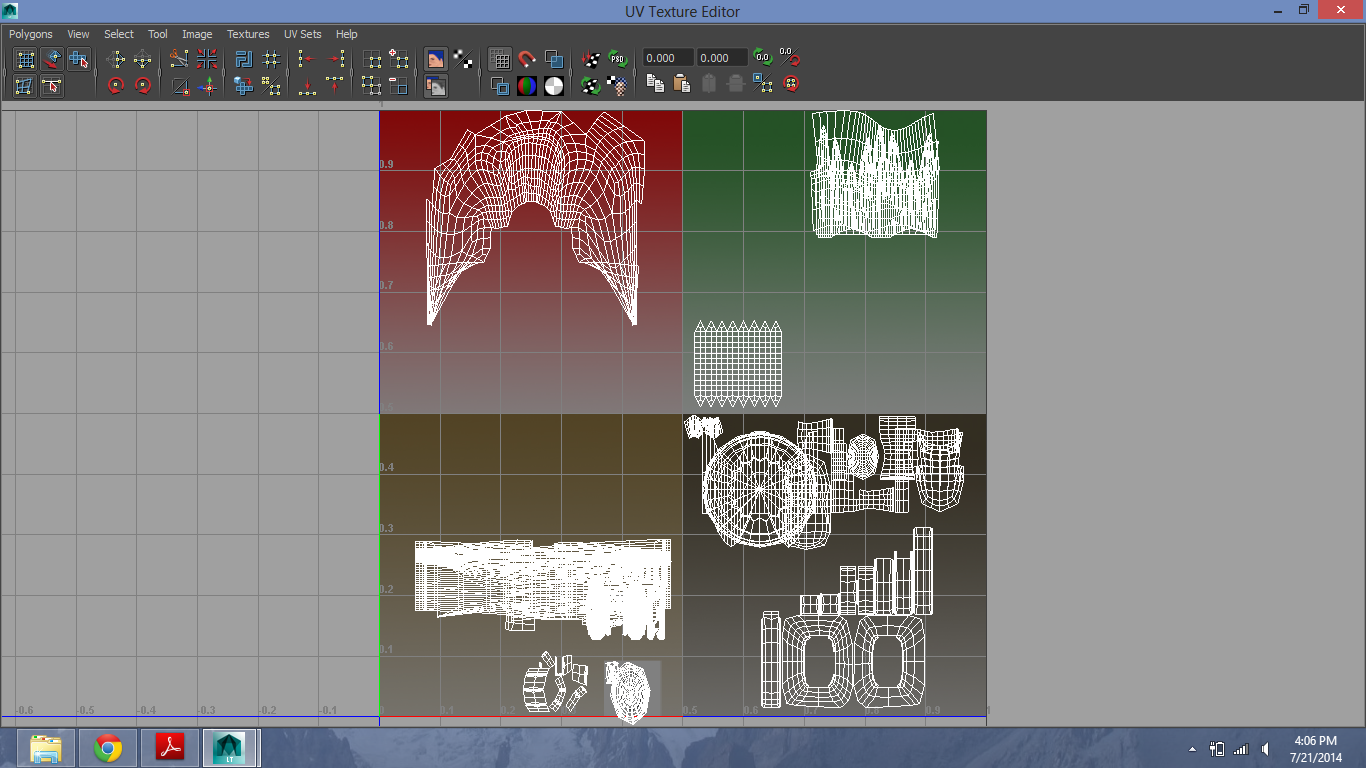 MayaLT was also a great help when working with animation. Give Up Games has been using a motion capture system (mocap) for a long time. One thing we learned is that in the Give Up Game Engine, all of the keyframes that were assigned using mocap technology was very expensive in terms of the processor power in running the video game. For example, using MayaLT's graph editor, we had to alter the animation curves from each of the rotations of each bone. Here is just one example of that: 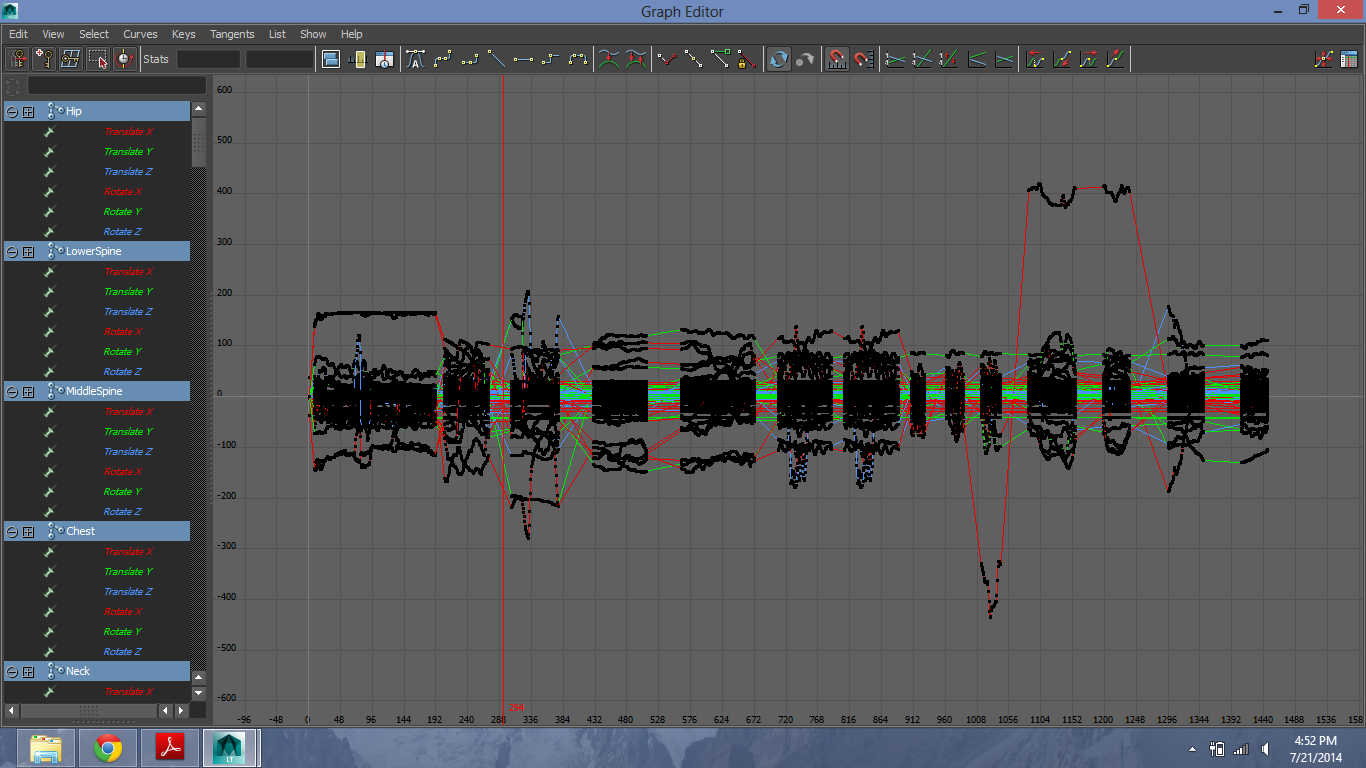 All of those crazy keyframes (the black dots) at each of a thousand frames of the animation, for each of three rotation axes, for each bone in the skeleton.... well those add up, and end up using a lot of processor power! 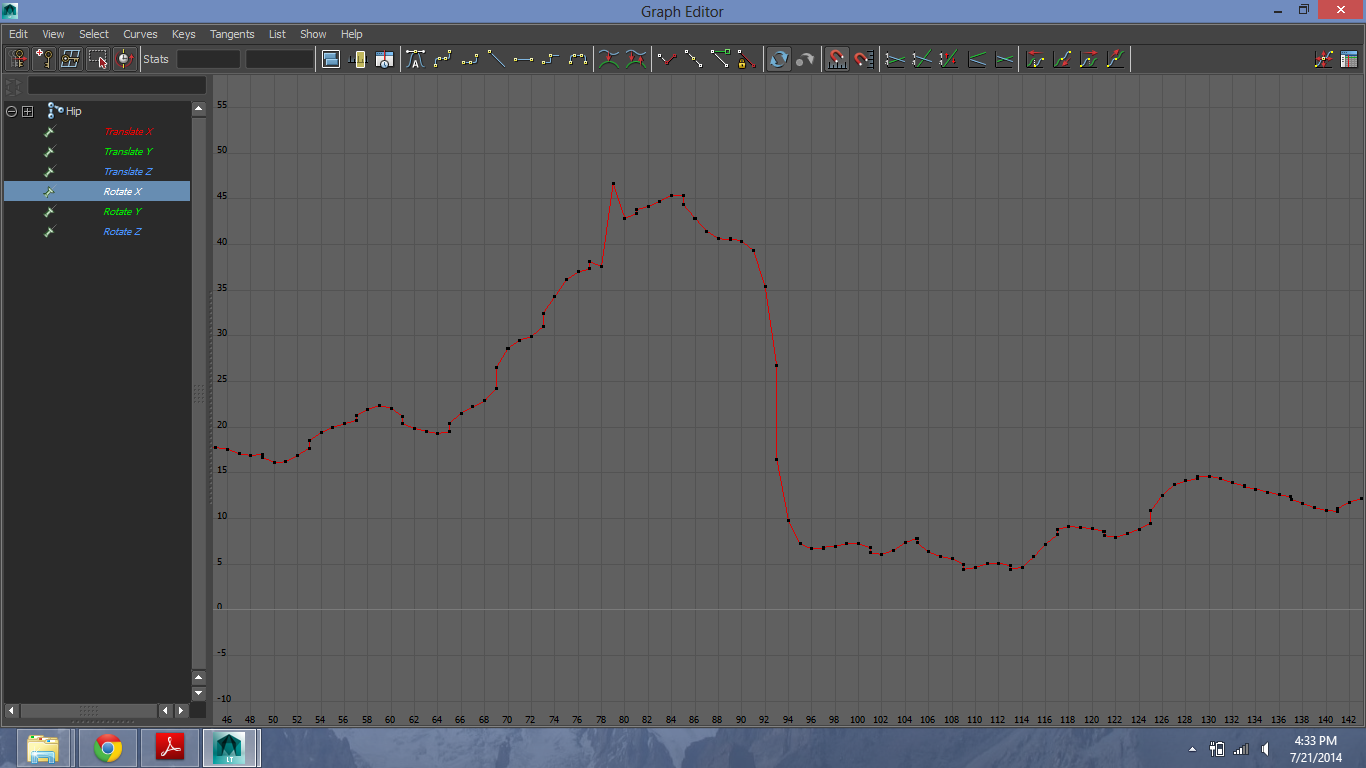 Not only that, but you can see where there are weird spikes in the mocap data that don't make sense. Well, MayaLT's graph editor allowed me to easily go in there, and delete all of the superfluous keyframes, and save a whole lot of processing power for the game. 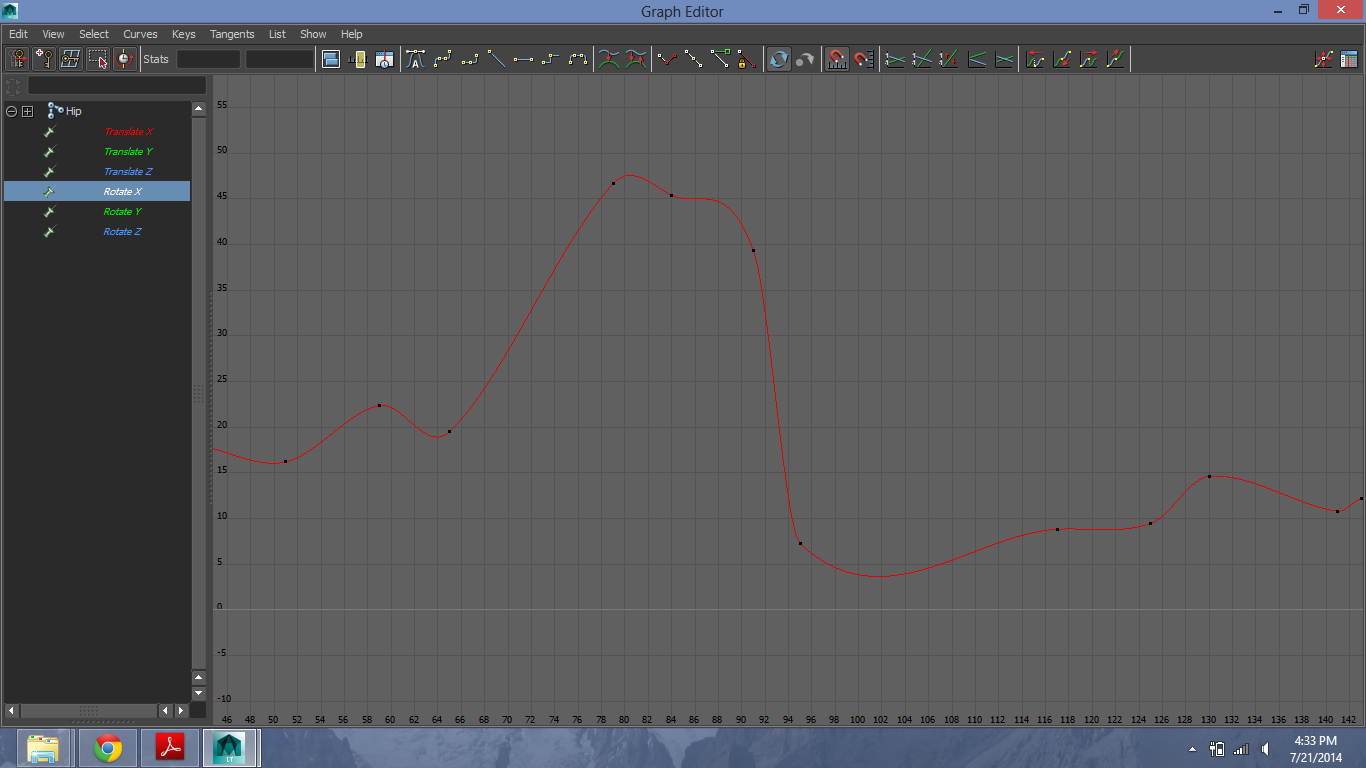 In addition to the three toolsets described above (modelling, UV, and animation), there are lots of other tangible areas that MayaLT helped with, including exporting to FBX files that our engine could read.

However, there was very important intangibles that MayaLT contributed to Give Up Games. Because of the inexpensive yearly subscription price that we invested, we knew that we were using world-class software to make our game. That brought a lot of confidence to the team. Another intangible that we appreciated was that it helped us focus and organize much better. The very fact that we invested some money into MayaLT's tools made us believe that we had to get the most out of these tools, and thus we had to schedule and organize our workflow so that we felt like we would get the biggest return on our investment. This has helped us finish The Elf Who Killed Christmas, and is helping us focus on our next multi-platform launch coming this autumn.

Posted by George at 1:56 PM No comments:

Give Up Games is proud to be two brothers who create almost everything for our games. (We have worked with character designers on The Elf Who Killed Christmas, and the forthcoming Homeless Guy.) 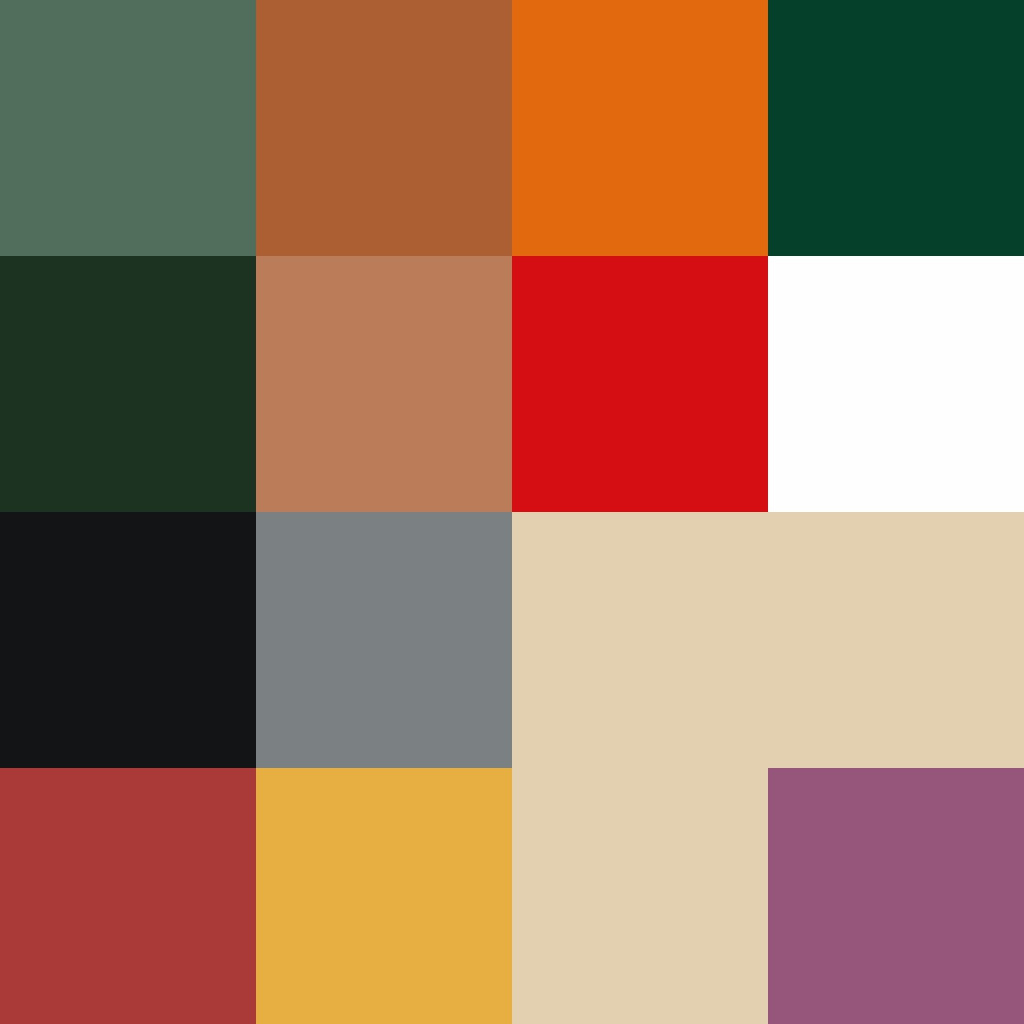 With that in mind, we developed methods to work quickly in order to deliver the final game. The most obvious example of this that comes to my mind is with 3d textures. Because we had decided early on that we wanted the style of the game to be cartoonish, so we didn't need to create realistic texture maps. (In fact, for a while we were even considering that the game would utilize flat shaded rendering to lend even more to the cartoon feeling.) The image file above just about covers all of the images in the factory level. If you look at previous posts about the factory level (here), you can probably place a lot of these colors.

Using Krystal's great character designs and set illustrations, we simply picked colors from those illustrations, and thus the color palette for the game was created, along with a lot of texture maps, like the one above. The gingerbread house below is a great example of where we used Kystal's art, and took the next step with it. The reader can probably see a lot of the colors from the factory in the illustration of the gingerbread house. 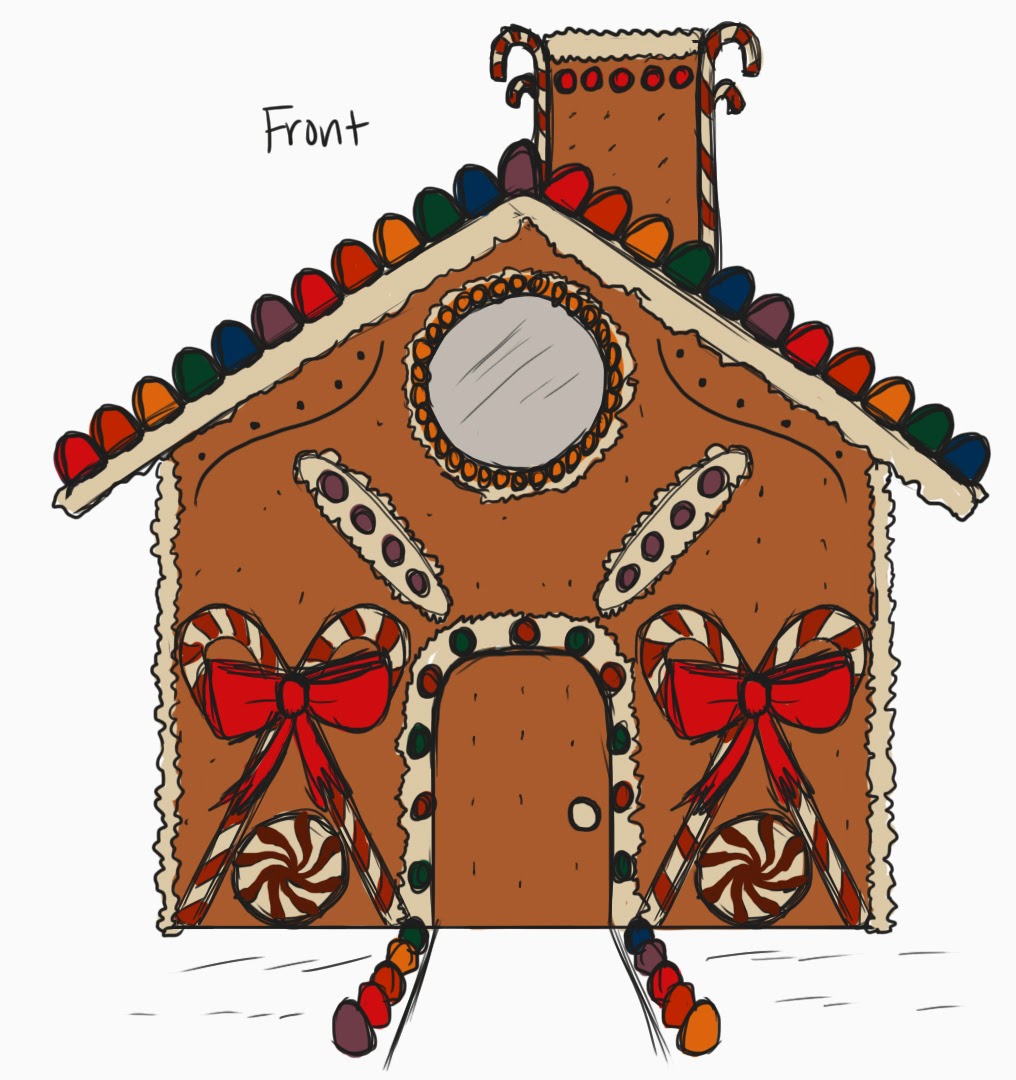 This really shows the value that an artist can bring to the team. To be sure, Krystal only designed a few set pieces, and we had to create the rest. (After all, with her talents, she was in high demand, and although we would have loved to work with her throughout the entire process, we couldn't.) However, in addition from the set and character design that she lent to the project, that also allowed the Give Up Games brothers the opportunity to utilize elements of those designs (here, the color palate), for elements that she did not design. As proud as we are, we knew where our shortcomings were, and were able to outsource certain design elements, such as the gingerbread house, and then take those designs to the next step for other elements in The Elf Who Killed Christmas.

Posted by George at 6:38 AM No comments:


I hope the reader can see how the Give Up Games Tile Editor application that Mike created has been very useful in level design. It has increased the speed at which we can prototype levels, see what works and what doesn't, and make quick changes before a lot of time is spent to finalize a level. Theoretically, a game creator can actually make a game without too much talent with 3D applications, only using Give Up Games Tile Editor. Here is one example of how Mike prototyped the factory level without the use of Maya. (Of course, the characters that he's shooting were created in Maya.) This is an early version of the factory level, and it was changed based on playing through this prototype, and figuring out a design that we liked best.

Posted by George at 8:16 AM No comments: